The original Barrowland Ballroom opened in 1934 in a mercantile area east of Glasgow’s city centre and was built by “Barras Queen” Maggie McIver. 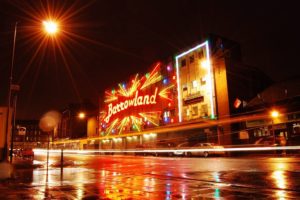 The Barrowland building includes large street-level halls used for the weekend markets, with a sizeable weatherproof hall above. The front of the building is decorated with a distinctive animated neon sign. The sign is believed to be the biggest of its kind in the UK

The building was largely destroyed by fire in 1958, leading to a complete rebuild. The rebuilt ballroom opened on Christmas Eve 1960.

In more recent years, the Ballroom has become a major concert venue with a capacity of around 1950 people, known for its acoustics and its sprung dance floor. 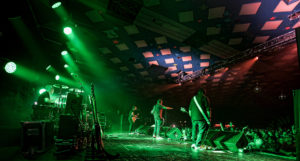 Simple Minds filmed the video for their 1983 hit single, “Waterfront” at Ballroom.  Bowie, Biffy Clyro, Oasis, U2, The Stranglers, The Clash, The Smiths, Big Country, Muse, Foo Fighters, Franz Ferdinand, Texas, Snow Patrol, SLF, The Vatersay Boys and many other acts too have played the Ballroom. 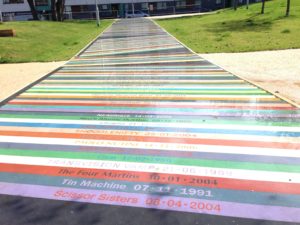 Adjacent to the Ballroom is the Barrowland Park where there is a pathway which features the names of many artists ,who have played at the Ballroom over the decades.

While it is a legendary rock music venue, the Barrowland has held shows in every music genre from Rap to classical and is often used to stage specialist events like record & comic fairs, tea dances and corporate events.

The Glasgow Stage Crew (voted by the bands as friendliest crew in Britain), medical and security is provided on all shows by arrangement.